You can avoid a water damage nightmare by following the tips in this article.  By understanding what to look out for a South Florida homeowner can save thousands of dollars and lots of unwanted stress and aggravation. 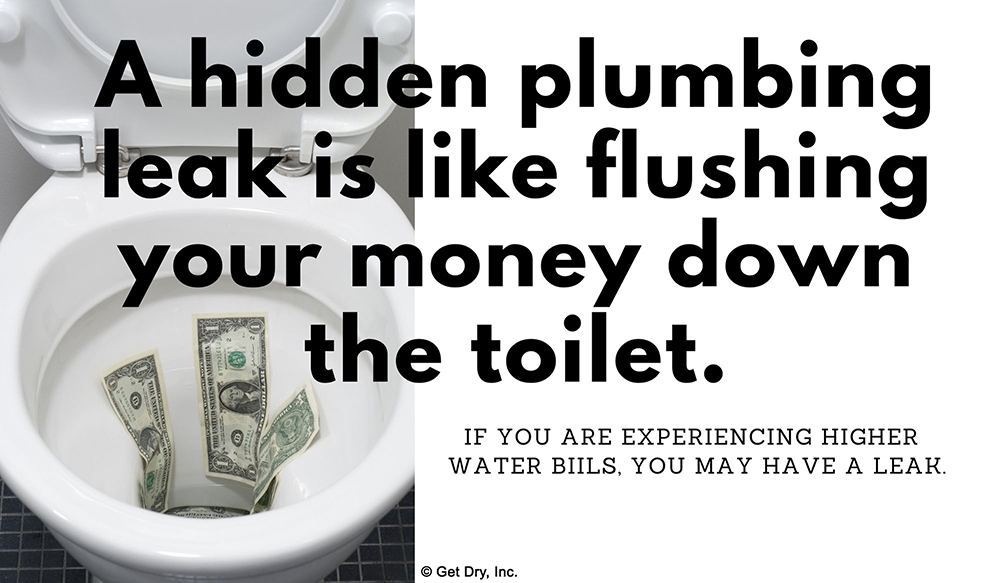 The Risks of Plumbing Leaks

When plumbing leaks happen causing a water damage emergency calling the best South Florida water damage and restoration company is the smartest thing you can do.  At Get Dry, Inc. our years of experience in water damage  removal, mold removal and insurance company issues make us your best choice.

Based in South Florida we serve all of Broward County, Palm Beach County & Martin County.

Your plumbing system is the most essential part of your home. I mean – what can you do without water, gas, and a sewage system? I don’t even want to think about it…

Pipes, with other components like tanks and stopcocks, enable the flow of liquids and gas to their right destination. The functionality of your plumbing system can have a great impact on the safety of your home because plumbing leaks can cause structural damage, mold problems and have dire financial consequences.

Here is a story about a client we had, Mrs. Clark who lived in a condo in Palm Beach County.   For months she was spending a fortune in water bills until her son alerted her to a plumbing leak when he came to visit. As soon as he entered her flat, a musty odor hit him like a punch in the face, since his mothers smelling ability wasn’t so great anymore, she’d somehow got used to the smell! Immediately he sensed what was wrong and called us to investigate. We traced the leak, fixed it and with her next months bill.  She noticed her water bill drastically went down and they all lived happily ever after.

So what exactly causes plumbing leaks? 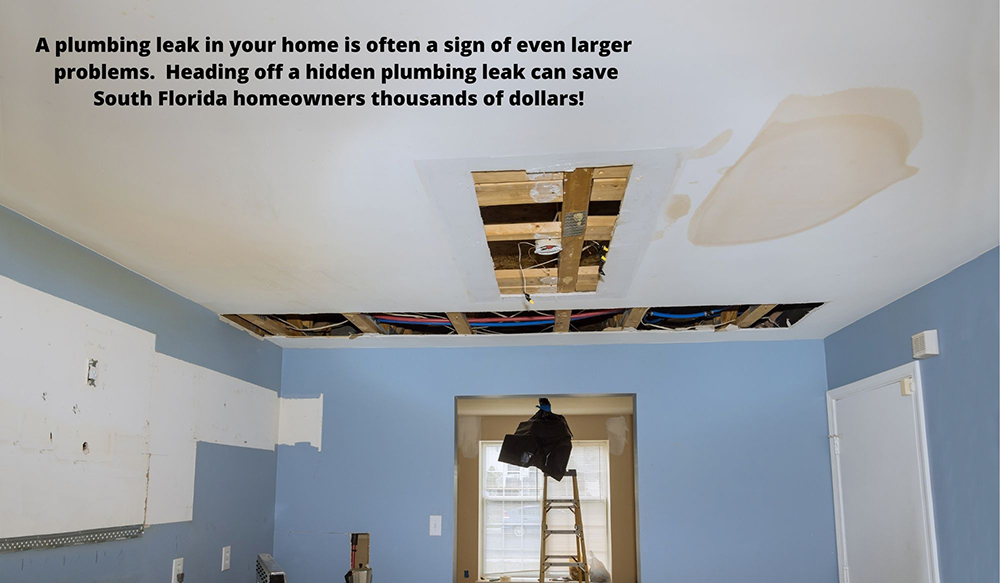 There is a certain level of water that pipes can withstand before they start to collapse, this then leads to leaks. The harder water hits the pipes, the higher the damage it does to them, in extreme or continuously rough situations high pressure can lead to damaged pipes that need to be immediately replaced to prevent a water damage emergency.  Sometimes water pressure that is too high will cause a seam to rupture causing a leak and a flood.

Just as we age and start to creak, pipes do too and over time, this can cause corrosive substances like rust to amass. This wearing away eats the pipe and causes it to disintegrate. The result is several openings that cause water to leak.  Here in South Florida homes have been built with iron pipes. At the time iron was considered the strongest piping material available.  However, iron can rust from the inside and there is no way to tell just how thing the walls of an iron pipe have become.  It’s only a matter of time until your old iron pipe will rupture.  The amount of water that can shoot out of a broken iron pipe is unbelievable.  You’re in some cases your entire home could flood in a matter of minutes.  If you are away, from your home and you have an iron pipe break, you will need to call your insurance company.  Often a copper pipe or a pvc pipe will spring a leak, not true with an iron pipe rupture. If your plumbing is over thirty years or more, it is recommended that you get a replacement.   For more information on the problems with cast iron pipes read this article. Cast iron plumbing problems

Although clogs in the drain might seem like a small issue because they are easy to fix, leaving them untreated can add to corrosion thereby adding to the rusting of pipes. These clogs can also contain toxic materials that can eat up pipes, causing them to break and cause leaks.

When pipes are installed, plumbers place seals that are watertight on the pipes whenever they connect pipes to fixtures such as a sink. The effectiveness of these seals can reduce over time thereby causing leaks around where they were placed.  One of the most common water damage nightmare situations happens when the wax seal under your homes toilet starts to break down.  Sometimes that leak is visible and water is seen on the bathroom floor. However, sometimes the water finds it’s way into your homes structure where it starts mold growth.

Metal pipes contract and expand during the switch of weather between extreme cold and heat due to the temperature. If there is a sudden temperature change where you live, it can damage your pipes by causing them to contract or expand quickly thereby causing leaks and cracks.

If you have noticed an increase in your water bills and you may not understand why. It is most likely a leaking pipe. Imagine having to find out that your bank account is being sapped by something that you do not know about and at the same time is causing is causing harm to your home. A leaking pipe in your home is like a letting someone tap into your atm card.  If you don’t keep track of your bank statements and the atm bandit only makes small withdrawals then you may not notice.  However over time, you can pour out thousands down the drain. The problem here is that the water from a leak, must go some place.  I hate to think about where.  Then there is the question about mold, that’s another story.    Watch out for those red flags if you bill starts creeping up and up for no obvious reason!

That is one of the commonest signs of a leaky pipe. It may appear subtle at first, causing you to ignore them. You do not have to ignore them; they are signs of a leaky pipe and sooner or later the affected areas will be utterly damaged; therefore, affecting the whole structure. If you ever see a stain that you cannot explain on a surface, be sure there is something going on behind that surface – and it is the plumbing leaks.

An unpleasant odor in the room may not always be a result of poor hygiene or a naughty pet; sometimes, it could be because of the leaking pipe in the building. When water becomes stagnant, it produces an odor you would scarcely believe. Sometimes you may want to air your room or use a vaporizer; the musty smell will not stop totally until you fix the plumbing leaks.  In addition, that musty smell could be mold growth.  Once mold growth starts, your only choice is to call a mold removal company. Mold removal is a huge part of our business.  This is a problem that is often overlooked even after a plumber or insurance adjuster has left the scene.   Fixing a broken pipe or drying a kitchen and forgetting the moisture behind to walls is a recipe for disaster and a potential water damage nightmare.

If you have noticed a sudden crack on your wall or ceiling, this could mean that your plumbing leak is contending with your home’s foundation. It means that the leaking pipe has undermined the foundation of the house. An undermined foundation is a weak foundation and it will slowly sink until the doors, windows, ceiling, and floor are torn apart.

Plumbing leaks cause a lot of damage, ranging from financial damage to health, and environmental damage. The following are just a few of such dangers:

Plumbing leaks lead to a waste of water. For every drip that comes out of a leaky faucet once in every minute, there is a wastage of 34 gallons of water per year. Considering the fact that many nations of the world have barely enough water to survive, it should not be wasted. Having your leaks repaired will make a big difference in your overall water consumption and water bill significantly.

Plumbing leaks do not only cause structural damage; they put your health at risk too. Through a leaking pipe, harmful contaminants can enter into the water supply of the home. Similarly, a damaged pipe can result in a change of water pressure within, which can cause the pipe to take in water externally. This external water could contain anything dumped on the ground such as pesticides, herbicides, animal wastes – and they are harmful to the body.

One of the most dangerous effects of plumbing leaks is that they can cause fire accidents. It begins with rodents chewing the electrical wires and leaving them exposed. If a leaky pipe is leaking close to the electrical system or loose wires, it can create a spark and ignite a fire.

These are two dangerous hazards that can appear as a result of a water damage emergency caused by plumbing leaks . Mold can trigger allergic reactions and asthma attacks in some people. It can also cause skin irritation, respiratory infections for people with pre-existing health conditions, as well as soreness in the throat and nose.

Some plumbing leaks can be identified immediately because they are visible to the eyes. However, it is possible to have a plumbing leak inside a wall that you do not know about until something major happens. You can avoid this by having regular plumbing inspections and if you smell something strange or see a slight discoloration on your walls, then you have a reason to call an expert.  At Get Dry Inc, we offer free home inspections. It’s better to call us and avoid a serious water damage nightmare.